I walked up to Randwick and met William and fed him some breakfast, then we took a bus downtown. We walked all over Westfield Mall. That place is gorgeous. The kid really needed new shoes. Here’s proof: 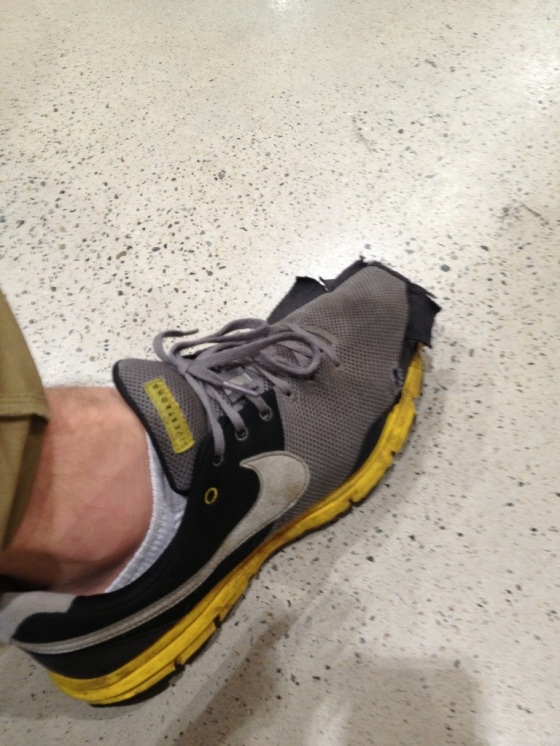 We found some new Nikes, and the went out and I got a good look around. 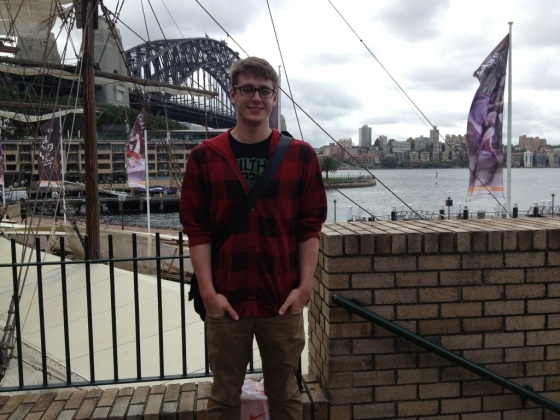 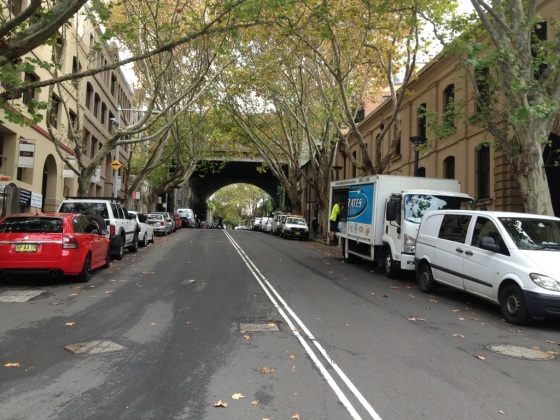 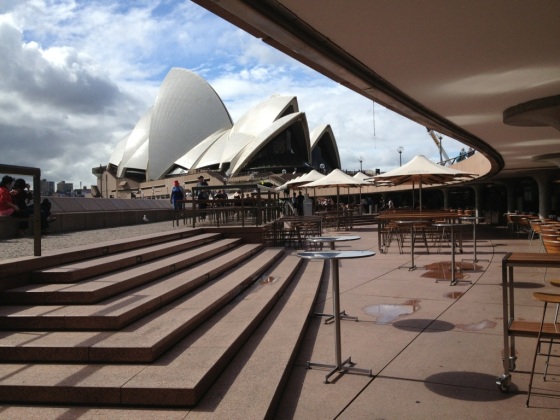 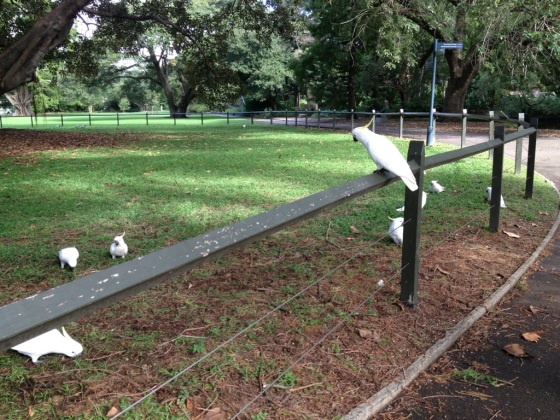 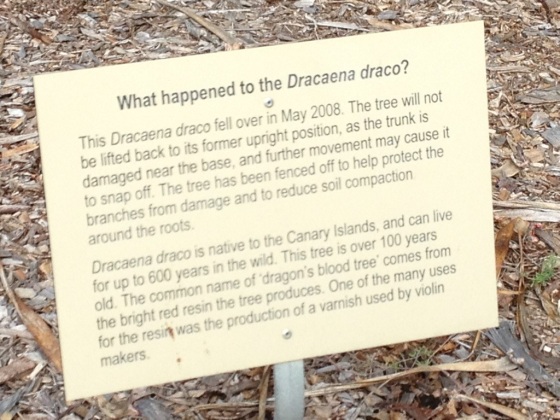 Today was a relaxed day. We went to Bunnings, the hardware/garden store, and got some supplies. Then I went to the beach and laid around for a couple of hours.

Later we ate leftovers, and Robert strung the solar lights he got at Bunnings. So pretty on the deck!

Today we drove to the Blue Mountains. It took about two hours each way.

We stopped in a couple of little towns. The first was Leura, and we took a hike down along a long cascade. 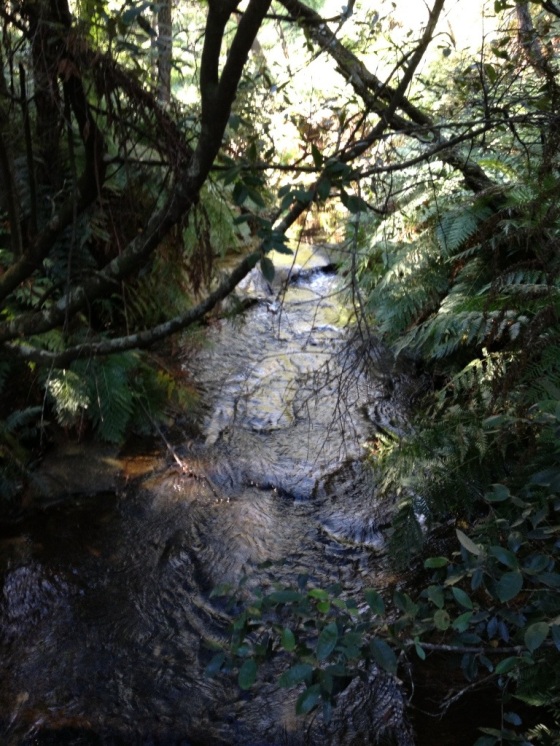 It’s sheltered by trees and cool, and so pretty.
Off to lunch at a place called Bon Ton in Leura.

And this is just so I remember the nice wine we had:

Back in the car, and a drive to a lookout area that is magnificent.

Quick explanation of what you see in that photo:

The place is really immense. We were there late in the day as the light was beginning to fail, so I couldn’t get a good photo of the whole panorama, but it was really something and worth the drive.

Robert is vegetarian, so I decided to make a roasted vegetable torte, and shrimp tacos.
I bought lots of roastable veggies, such as carrots, zucchini, potato, butternut squash, onion, portabella mushroom, and also got some brie and some puff pastry. I preroasted all the vegetables. 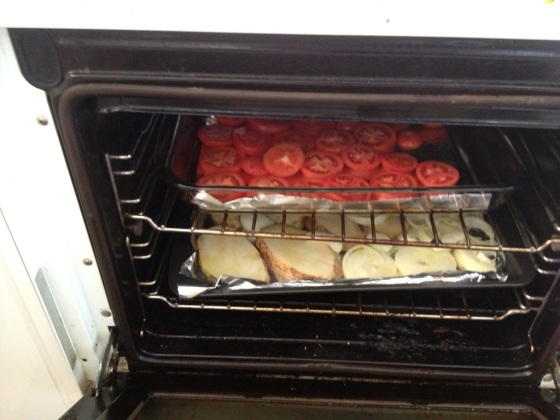 Then I put a layer of puff pastry in the bottom of a pan, and started making layers of vegetables, one at a time. About halfway through, I added a layer of brie. Then more vegetables. Then I put another pan on top, and weighted it down with cans to mash the whole thing down. 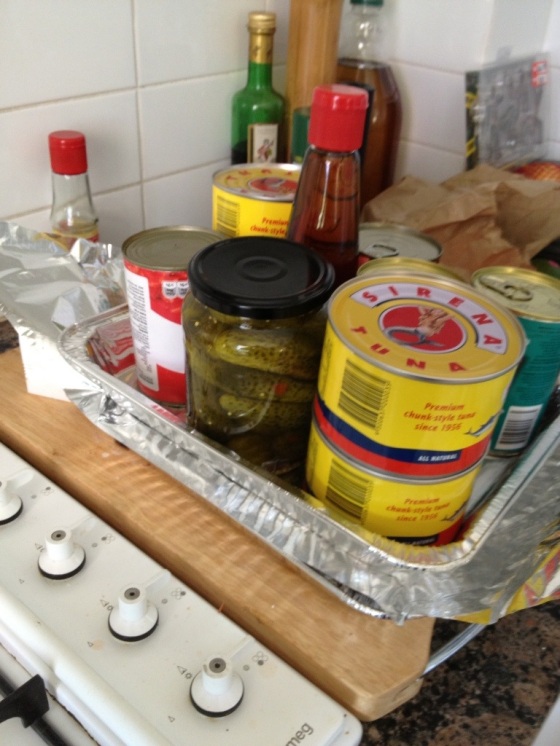 Those are canned goods just piled on top.
After a while, a lot of liquid is leeched out, so I drained that out. When it was time for dinner, I put another layer of puff pastry on top, and baked it. It took about an hour. I’d say I was baking it at about 350 but the ovens here not only have C temps, but they have “speeds” or something, so I’m not really sure what I did. Anyway, it looked like this when it came out:

Meanwhile I marinated shrimp in a lime-based marinade that Robert had, and cut it up, and put in on the grill in another pan.

So dinner was shrimp tacos with the roasted vegetable torte.

Forgot to take any pictures of the actual dinner but you get the idea. 🙂 I made chocolate chip cookies too, as a treat for William.

Here’s a photo of a torte slice from the next day:

When William moved here to go to the University of New South Wales, he told us how expensive things were. I heard him, but part of me thought, “He just wants more money!” But now I’m here and I can see it for myself. I have bought groceries and such, and have seen for myself how pricey things are. (This is disregarding the exchange rate. It’s something like $1.08 USD to 1 Australian dollar, so just figure a dollar’s a dollar when you look at the prices.) Tonight I was out with William and we ran into a liquor store to get some photos to prove the point. 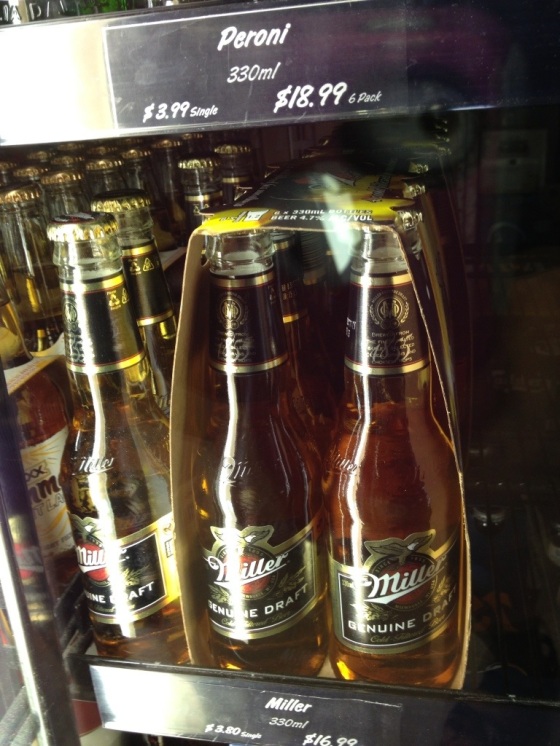 And this was the sign outside a Subway sandwich store:

Earlier at the grocery store I bought some chocolate chips. All the bags were maybe half the size of chocolate chip bags in the US, and this one cost about $5. 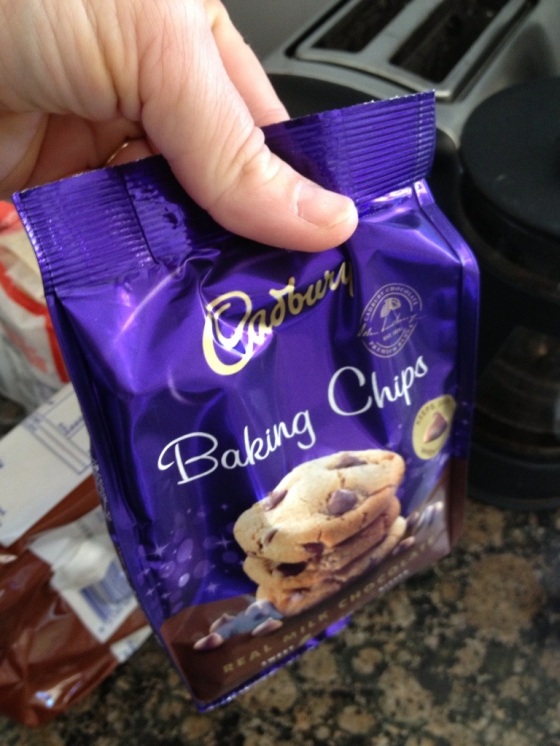 The same is true of just about everything I looked at and/or bought. This is probably why the Australians I’ve seen so far are so fabulous and thin. They can barely afford to eat! 😀 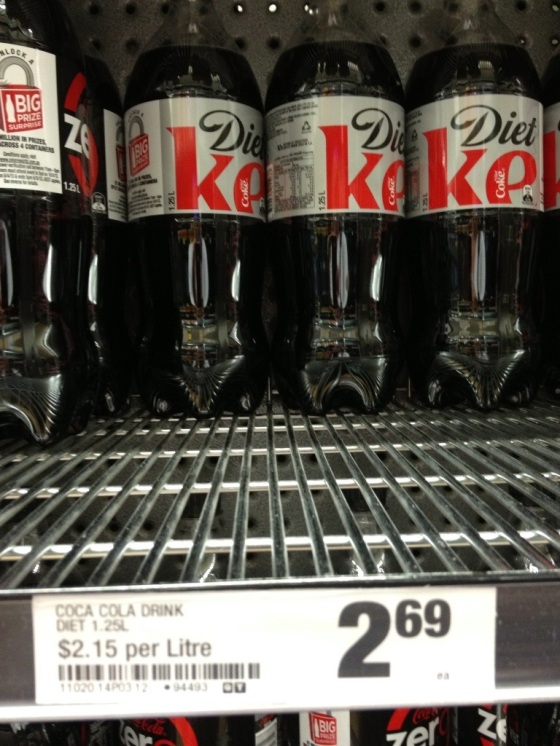 We drove about two hours north to visit Robert’s friend at her country house.
Here’s Robert’s pic of himself, with me driving in the background. Do I look tense? I am.

Anyway, we got there intact and it was a beautiful drive. 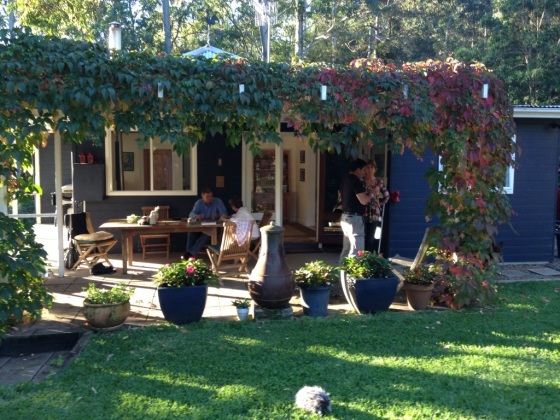 It’s about four or five acres, with a house and a guest house, and a horse and a dog. And it’s idyllic.
Gaye and Mike were great company, and served up a massive and tasty lunch.

I drove us back home through Sydney rush hour traffic. My hands are sore from gripping the steering wheel so hard!
Also, in the interest of full disclosure, I did drive on the wrong side of the road briefly, in the country, discovering my error when a car appeared coming the other way. No harm but slightly elevated blood pressure. 😀

We saw the Handa Opera’s production of Carmen on Sydney Harbour.

The production is amazing. The stage is on the water. You see “CARMEN” backwards there on the stage… so it’s legible from behind.. which is over at the Opera House and Harbour Bridge etc. The voices were beautiful and so was the dancing. Here’s the view of the bridge and (dark) Opera House from the venue:

Earlier, we had dinner with Robert’s friend Claire.

Down the Rabbit Hole
Blog at WordPress.com.